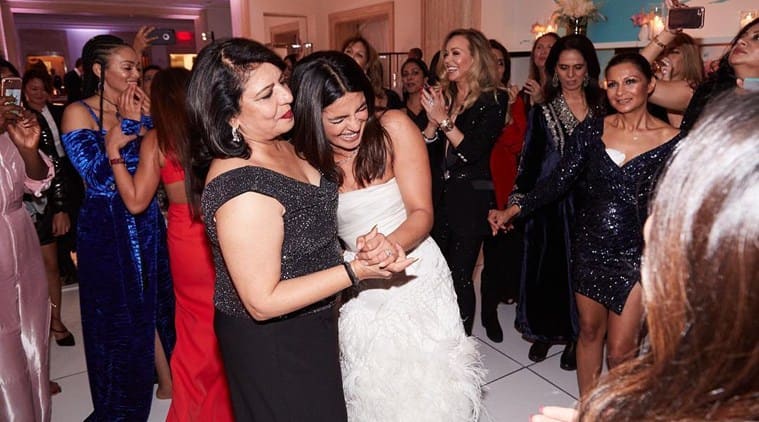 Priyanka Chopra has become one of the biggest success stories with parallel careers in Hindi cinema and Hollywood but mother Madhu Chopra says she was briefly worried whether her daughter was going too fast.

With successful films such as Fashion, Kaminey and Barfi to her credit, Priyanka moved to the US to play the lead role in TV show Quantico, which led to other offers from Hollywood.

The actor also runs a production house Purple Pebble Pictures with her mother, with a focus on Indian regional cinema.

When asked if it was tough being a mother to Priyanka at a time when she started out in a male-dominated industry, Madhu told PTI, “There were times when I had doubts, if this is the right way she’s going. She was moving so fast. She was on a rocket-propelled move.”

Madhu said Priyanka “wonderfully” evolved as an actor and as a mother she is with her daughter every step of the way.

“I thought she’s missing out on some aspects of her life because she’s so dedicated to her career, profession and her craft. As I saw her evolve, I started enlisting. Only in the initial days, I was worried. Later, I was with her in her trajectory.”

The mother-daughter duo has produced the upcoming Marathi film Firebrand under their banner. The film will start streaming on Netflix from February 22. Madhu said the story of Firebrand resonated with them.

“Priyanka is bold, she’s not scared. She says it as it comes, so the content should reflect that. She supports this kind of films. She has the final say, on the creatives and every aspect of filmmaking.

“She’s so passionate about films, I’m probably one percent of what she is. She looks after every aspect of filmmaking, it’s her baby,” Madhu Chopra said.

Directed by National Award winner Aruna Raje, the film touches upon the concept of modern-day relationships, its complexities and chronicles the story of a strong woman who rises above challenges.

Madhu said, in the beginning, the biggest challenge for them was to be taken seriously.

She said, “They said ‘Priyanka is in America how’s she making films here.’ But Priyanka knows how to do things and is very up to date with gadgets, so remote controlling your company isn’t tough. The difficulty then was people taking you seriously. After Ventilator, people realised we mean business. Our films have been very well received. It was our mandate that regions should get a platform, all India or global.”

Madhu says the team is gearing up to see how the global audience responds to Firebrand.

The actor has been in and out of the country ever since her wedding with singer Nick Jonas. Priyanka had recently joked how her mother wanted to invite more people for the wedding but finally, they had to agree on only 200 people.

When asked about that, Madhu quipped, “Yes! She wanted a very intimate wedding. That’s her choice. For me, it was like a shock! Who do you not invite?! But she took her scissors and (cut all the names).”