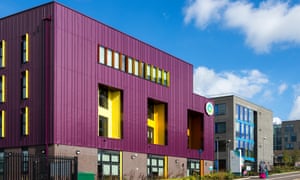 Part of the government’s flagship free schools programme is facing mounting financial difficulties because of its unpopularity with parents and pupils, with schools forced to pay back millions of pounds to the Department for Education and cut staff after failing to attract and retain students.

University technical colleges (UTCs), a type of free school in England that was launched in 2010, ran up debts of £14m last year after many fell short of their forecasts for pupil numbers. Others had to borrow money from the DfE’s funding arm, throwing into question their long-term viability.

Research by the Price Bailey accountancy firm disclosed to the Guardian reveals that 31 out of 40 UTCs with published accounts owe money to the DfE’s education and skills funding agency (ESFA), including 25 schools owing a total of £8.6m after educating fewer pupils than they received funding for through their general annual grant.

As a result, UTCs face an uncertain future, despite many being housed in brand-new buildings, including modern science and engineering facilities intended for the surge of pupils who never arrived.

“Eight UTCs have already closed and two further closures are imminent, so unless UTCs can boost pupil numbers and performance, more will follow,” said Gary Miller, the head of education at Price Bailey.

“UTCs with tight cashflow could be seriously affected by these clawbacks. After salaries, which often make up 70%-80% of the budget, there isn’t a lot left. £350,000 per school is the equivalent to seven or eight teachers, so in some cases cuts to staff numbers may be necessary, which could impact educational standards.”

Wigan UTC is the latest to announce its closure. Parents were told that the decision to shutter the school had been approved by DfE chiefs in June.

“The decision to close Wigan UTC has been taken as the UTC is financially unviable. The UTC has been unable to recruit sufficient students to operate without a growing deficit, which will severely hamper the quality of education it can provide moving forward,” the school told parents.

Wigan’s closure follows those of Black Country UTC, in Walsall, which attracted just 158 students out of a planned 480, and Burnley UTC, which was expecting 800 students but enrolled only 113 in the three years it was open. Analysis by Schools Week found that £64m was spent on eight UTCsthat have closed.

The difficulties experienced by UTCs are part of a wider trend of schools having to return overpayments to the ESFA, usually because of lower than expected pupil numbers. In 2016-17, just three academies in England had to return funds to the DfE, but in 2017-18 that figure rose to 50 academies, including UTCs, with nearly £4m returned, according to a freedom of information response.

Price Bailey said it had analysed the accounts of 40 of the 50 UTCs operating last year and found that only nine were operating within their budgets, with 31 recording deficits and one or more outstanding debts to the DfE, including 10 owing nearly £4.7m in general loans to cover running costs and three with working capital loans adding up to nearly £1m.

Angela Rayner, the shadow education secretary, said she was concerned that the financial struggles of UTCs were “being hidden in the government’s opaque academies system, with figures concealed from parents and the public”. She said: “Too much money is being wasted on ministers’ vanity projects, and the education system is being fragmented in the process. Labour will end the academy programme and ensure schools are properly accountable, and invest in an integrated education system through our national education service.”

As part of Michael Gove’s free schools revolution, UTCs were meant to provide specialist education in science, maths and technology subjects, and attract university and industry backing. But the decision to admit students only from the age of 14 meant that they struggled to compete with secondary schools taking pupils from the age of 12.

“The problem with brand-new schools, particularly specialist UTCs, is that they are not tried and tested, which can make parents and pupils wary. Faced with a choice between a new UTC with little or no track record and the local school, which might have served a community for generations, the latter often wins out,” said Miller.

A report by the Education Policy Institute (EPI) found that UTC pupils’ GCSE results were almost a grade lower than similar students at mainstream schools, with the most able students doing even worse. The EPI also found that more than half of UTC students left after taking GCSEs.

But while many have struggled, UTC Reading has thrived and is now oversubscribed, having been given an outstanding rating by Ofsted in 2015 and boasting partnerships with Microsoft. Others have been less successful, with five rated as inadequate by Ofsted.

A DfE spokesperson said UTCs remained a “key part” of its efforts to improve educational standards. “Funding that is provided to set up new university technical colleges is based on estimates of pupil numbers. Once the school or university technical opens, this funding is then adjusted to reflect actual figures and, where necessary, we work with the institutions to recover funding.

“The department continues to support UTCs to be educationally successful and financially viable,” the DfE said.