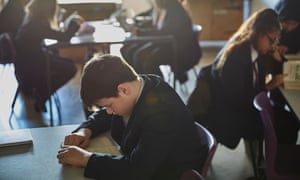 Councils across England are struggling to keep pace with rising numbers of applications for secondary school, leaving thousands of pupils without a place at any of their preferred schools.

More than 600,000 families across England and Wales were told on Friday which secondary school their children would go to in September – but in many areas there was disappointment, with shrinking proportions receiving their first choice.

According to some estimates, as many as one in four families did not get their first preference in England. Labour blamed the government policies that took the power to create new schools away from local authorities.

The problem appeared most acute in London, the south-east and other big cities such as Bristol and Birmingham, where the twin impacts of the post-2006 baby boom and population inflows have been most keenly felt.

Nick Gibb, the schools minister for England, said: “This government is determined to create more choice for parents when it comes to their children’s education and we have created 825,000 school places since 2010, and are on track to see that number rise to a million by 2020.”

But Angela Rayner, the shadow education secretary, said: “In the years ahead, more and more children will miss out on a secondary school place unless we urgently provide new places across the country. The Tories have made it harder for councils to act on their legal obligation to provide new school places, with an inefficient free schools programme making it harder for them to create new places where they are needed.”

In Greater London, less than two-thirds of children received their first preference of school as the total number of applications rose again. This year 95,300 requests for places were received by the 33 London boroughs, compared with about 80,000 five years ago.

The number of families in London who failed to received a place at any of their named choices rose by 12%, with 7,250 either offered another school or unallocated.

Nickie Aiken, the leader of Westminster council and the London councils’ executive member for schools, said London’s boroughs had provided a preferred place for 92% of applicants. “It is vital that all children in London have access to a high-quality education, and London boroughs are working with their local schools to respond to increased demand across the capital,” she said. “We are also committed to working with central government to continue our good work in addressing school place pressures.”

Lambeth supplanted Hammersmith and Fulham as the hardest borough for parents to obtain their first choice, with just 55% doing so this year. Havering had the highest proportion of first-choice allocations with 77%, while rising demand for places in Newham caused a fall in the percentage of first choices being filled from 70% to 65%.

In the south-east, Essex county council reported a fall in the numbers gaining their first preference – to 84%, down from 88% two years ago. The fall was in spite of three new secondary schools opening in September.

A similar picture was seen in Birmingham, where the increasing number of children moving from primary to secondary school led to the proportion getting their first preference dipping below 70%. The number of those without any of their choices jumped by 40% to more than 850.

In Bristol, nearly 500 of the 5,000 families applying for a secondary school place didn’t receive any of their named choices and were allocated an alternative by the council, while only 72% of applicants received their first preference.

Outside the big cities, many local authorities could boast of first-choice allocations above 90%, including Devon, Cumbria, Somerset and the East Riding of Yorkshire, where the councils reported that 94% of families had received their first preference.

In Cardiff, the proportion receiving their first choice rose to 88%. That figure could rise if some families turn down places at community high schools in favour of faith schools.