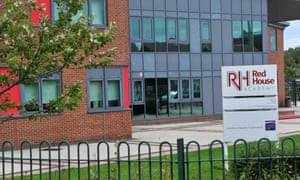 An English state school has suspended more than half its pupils in a single year for the first time on record, Guardian analysis has found, as national exclusion rates continue to rise.

Red House academy in Sunderland, run by the Northern Education Trust, an academy chain, recorded the highest fixed-term exclusion rate in England in the 2017-18 academic year. It handed at least one fixed-term exclusion to 254 pupils, just over half the total attending the school.

Forty-one schools excluded more than one in five pupils, or roughly 10 times the national rate of 2.3%. Two academy chains – Outwood Grange Academies Trust and the Northern Education Trust – dominated that list with nine and seven of their schools featuring respectively.

The Northern Education Trust runs 19 schools across the north of England, while Outwood Grange Academies Trust runs 31 schools in the north and the east Midlands. Rob Tarn, the trust’s chief executive, was previously the regional CEO (north) for Outwood Grange Academies Trust until March 2017. According to the Northern Education Trust’s accounts, he was paid £183,000 last year.

The latest DfE figures show that in the 2017-18 school year the rate of fixed-term exclusions increased for a fourth year in a row. A fixed-term exclusion is where a pupil is formally suspended from school for a set time, usually up to three days. The average length of exclusion last year was two days.

This week the Guardian published leaked government plans to improve behaviour in schools by extending exclusions and the use of “reasonable force”, prompting teachers and charity leaders to express concern that such a move could target disadvantaged pupils.

This year’s highest fixed-term exclusion rate was significantly higher than last year’s, which was recorded by the Outwood-run Outwood Academy Ormesby in Middlesbrough. The school excluded 41% of its pupils in the 2016-17 academic year.

The school with the second-highest exclusion rate in 2017-18 was North Shore academy in Stockton-on-Tees, which is also part of the Northern Education Trust. It suspended just over 40% of pupils.

There is growing debate over the use of “zero-tolerance” or “no excuses” behaviour policies, including the regular use of isolation and sending pupils home for apparently minor indiscretions.

Some argue that such approaches are necessary to raise standards and ensure a calm learning environment, while others say they cause children with complex needs to miss out on education.

The DfE figures show that schools with highest exclusion rates had on average 32% of pupils receiving free school meals – more than double the national average, which is 15%. At Red House the rate was 46.5%.

Academies accounted for 39 of the 41 schools with the highest exclusion rates. The other two were run by their local authority.

In November 2017, the Northern Education Trust and Outwood Grange Academies Trust joined other academy chains to form the Northern Alliance of Trusts, which was described as the first formal partnership of its kind between larger trusts.

Delta Academies Trust, one of the eight members, is run by Rob Tarn’s brother Paul Tarn, who also used to work at Outwood. Two Delta schools appear on the list of 41 with the highest exclusion rates. The Tarn brothers told the TES last year that the alliance aimed to raise aspirations in deprived communities in the north.

One teacher who has worked at a Northern Education Trust school with high exclusion rates told the Guardian he had witnessed pupils being excluded for what he said were minor offences, from wearing jewellery to having eyebrows that were deemed too dark.

“[The trust take over] these very, very deprived schools and they come in with a one-size-fits-all approach and say: ‘If you don’t do things our way then you are out, simple as.’ It’s kind of militaristic,” he said.

The teacher said pupils often fell behind with their work because they were being excluded so much. “There were times when I was teaching 25 kids and you had four or five different groups of starting points because so many of them had been given fixed-term exclusions.”

Another teacher, who worked at an Outwood school with a high exclusion rate, said it was heartbreaking to see pupils being suspended for trivial reasons. “There were students we really cared for and with whom we had put in a lot of time to build relationships with and that trust was completely wiped out,” she said.

Philip Tye, a councillor in Sunderland who sits on the local authority’s children, education and skills scrutiny committee, said it had been concerned about the high rates of exclusions at a number of schools in the area including Red House.

“It fundamentally affects the education of the child because obviously if they are not in school they are not being educated,” he said. “Look at the robust approach taken when parents want to take their kids out of school for a couple of days to go on holiday, yet they’re saying they can exclude pupils and it won’t have an impact on their education.”

A spokesperson for the Northern Education Trust said the proportion of students at Red House academy who attained a pass in English and maths had risen from 32% in 2017 to 58% this year.

“Good discipline in schools is essential in ensuring that all children receive the best education possible,” the spokesperson said. Arguing that the trust’s approach was common to all good schools, the spokesperson added: “Excluding students for short periods to reflect on their behaviour does not mean that we give up on them, it means we care enough to say no.”

A spokesperson for Outwood Grange Academies Trust said it took on schools that needed improvement in the most vulnerable parts of the country, and all but one of its inspected academies had been rated as either outstanding or good by Ofsted. The spokesperson said the use of fixed-term exclusions had fallen by 29% across the trust since last year.

“Our approach of using short suspensions in the face of extreme behaviours from students, along with significant support to help students obtain record results quickly, is a successful one,” they said.

The spokesperson provided a handwritten note from an anonymised year 10 pupil at Outwood Grange Bishopsgarth, which suspended 36% of its pupils last year, saying the school had improved since the trust took it over. “I realised that school wasn’t a joke and that grades do matter,” it said.

A Department for Education spokesperson said: “Headteachers do not take the decision to exclude lightly and we will continue to back them in using permanent exclusion as a last resort. Moreover, exclusion from school should not mean exclusion from education.”