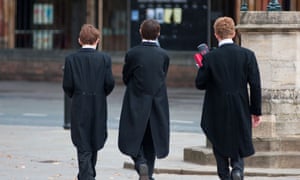 I couldn’t agree more with Melissa Benn that the private school system is “morally rotten” and the moment for its demise is, or could, be close (Education, 10 September). I emphasise “could” as this is hardly a new phenomenon or issue.

George Orwell in The Lion and the Unicorn recognised clearly how private education stood in the way of any move towards a fairer, more egalitarian and equal society. He – a product himself of Eton – knew only too well how those educated in such establishments sustained the status quo of a hierarchical society, with them nicely positioned at the top. Today, look no further than the highest echelons of the legal profession, banking, politics and the armed forces for confirmation: public (private) schools and Oxbridge backgrounds are massively over-represented.

We need a government that has the will to act. As Benn suggests, there are options. One, the slow death of private education through withdrawing charitable status, dripping in more working-class kids, etc. But how long would that take? Orwell suggested the state should start by taking responsibility for all education. He argued this might just be a gesture, but that gestures were important.

Why not nationalise all education, but in order that private schools quickly become an integrated part of a new democratically controlled comprehensive state education system? And that also means bringing back local education authorities. Let’s hope this forms part of the Labour party’s emerging national education service.
Jol Miskin
Sheffield

• It’s good news if “Labour looks ready to end an uneasy silence” on the entrenched segregation of private education. However, it has not broken its silence on ending the entrenched segregation of selection at 11, which affects thousands of children and it did not, in all those years in office, take any real action to end it. So will we see a new Labour government bring private schools into the state system, and along with them even more selection?
Margaret Tulloch
London

• There have been many articles about Oxbridge’s high number of undergraduates from private schools and the reasons particular to those universities as to why (Cambridge ‘encouraged’ by highest intake of freshers from state schools, 9 September). But high compared with what? Rarely, if ever, has an article made the point that Oxford and Cambridge private school intake percentages are broadly comparable with those of a number of other universities; and that last year 24 institutions had intakes on or above 20%. Surely, there needs to be a move away from this obsession with Oxbridge in order to interrogate the university sector as a whole.
Robert Harding
Ely, Cambridgeshire

• It is heartening to read about Cambridge University increasing its proportion of state school students to 68%. I wonder what percentage are from comprehensive schools and how many come from grammar schools and from those selective sixth-form colleges like Hills Road in Cambridge, where I believe a number of refugees from the private sector seek to benefit from the university’s most welcome conversion to positive discrimination.
John Lancaster
Peterborough